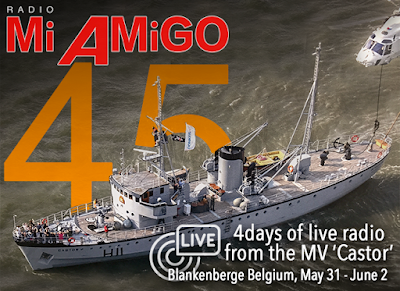 This year it is 45 years ago that Radio Mi Amigo was launched by Belgian entrepreneur extraordinaire Sylvain Tack.
He named his new radio station after the notorious radio ship it used: Radio Caroline's legendary MV Mi Amigo.
Radio Mi Amigo - together with Radio Caroline - was the only offshore radio station that continued to stay on the air in 1974, when new legislation was introduced outlawing the offshore stations off the Dutch coast. The taped programmes from Playa d' Aro in Spain and the live broadcasts from the MV Mi Amigo became legendary and are still remembered fondly, even today.
This week, we celebrate Radio Mi Amigo's 45th anniversary, together with our Belgian colleagues from 'Miamigo40', a group of free-radio enthusiasts, that includes many prominent Radio Mi Amigo veterans. What better spot for this unique reunion of 'ex-pirates' that were involved with the original 70s Radio Mi Amigo, than a real radio ship: the MV 'Castor', anchored in Belgium's Blankenberge harbour!
The MV Castor
The MV 'Castor' is a sister-ship of the MV 'Bellatrix', the notorious tender that was used throughout the late 70s and 80s to illegally supply the last remaining radio ships: Caroline's new ship the 'Ross Revenge' and the 'MV Communicator' (Laser 558).
Former Greenpeace flagship 'MV 'Sirius' too is a sister-ship of the Bellatrix. She too provided tender services to the radio ships in return for advertising, a true saviour during difficult times when the Bellatrix was closely watched by authorities.
Castor, now a museum ship, is the one remaining of 5 identical ships: the Castor, Bellatrix, Sirius, Antares and Procryon. They were built in 1950, originally used as pilots and later used by the Dutch navy.
Starting midnight Thursday, 4 days of special live programmes will air from a studio on board this temporary radio ship, that will be open for visitors throughout the event. We invite you for a meet-and-greet with the DJs in the on-board studio. You may also enjoy all live programmes at home, on your radio, as we will relay the entire event, live, via Radio Mi Amigo International's online streams, and on shortwave: 6085 kHz 49m band.
Our very own Johan Vermeer (a Mi Amigo veteran himself) will do shows, live on both Thursday and Friday from 15:00 - 17:00 hrs.
RMAI station manager Lion Keezer (ex-Caroline) will be there to talk about Mi Amigo International, and how it became 'Europe's nr1 Oldies station'. Our team will try and provide video, photo's and coverage on our website and on Facebook throughout the event.
We look forward to reuniting with many old 'shipmates' and friends, such as Bert Bennett, Wil van der Steen, Bob Noakes, Ferry Eden, Norbert and Marc van Amstel, who will all do live shows on the Castor. Together we will also pay tribute to two very dear Radio Mi Amigo friends we lost: Peter van Dam and Joop Verhoof, as 2 of their original shows are scheduled as well.
From Thursday, May 30 midnight till Sunday, June 2nd, Radio Mi Amigo International will relay the special Belgian 'Mi Amigo 45' anniversary broadcasts. (Fore one time only, our regular Friday and weekend programming will be cancelled to facilitate this special event relay)
All programs will come live from a studio on board a temporary 'radio ship': the MV Castor, sister ship of the notorious Bellatrix tender and Greenpeace Sirius that both supplied the Ross Revenge and the MV Communicator in the 80s. See the special event program schedule.
Come visit us! The ship and studio are open to the public, and we invite you to come and visit the DJs in our live-studio on board the MV Castor in Blankenberge harbour, where you can experience first-hand that Radio Mi Amigo is still very much alive today, 45 years later..."